Johor Bahru’s Jihin Radzuan to protect undefeated record at ‘ONE: Pursuit of Power’ 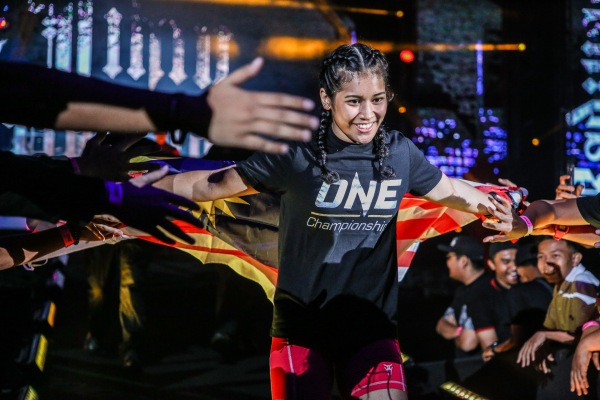 Hailing from Johor Bahru, Malaysia, Jihin “Shadowcat” Radzuan, 19, is one of the finest Malaysian female mixed martial artists today. With a professional MMA record of 2 wins and 0 loss, she is scheduled to compete before her countrymen on July 13, 2018 at “ONE: Pursuit of Power,” which marks her second outing in ONE Championship.

The Johor Bahru native is a Wushu World Champion and Malaysian Invasion Mixed Martial Arts (MIMMA) Women’s Champion. On March 9, 2018, she made her successful ONE Championship debut at “ONE: Visions of Victory,” which took place at the Axiata Arena in Kuala Lumpur, Malaysia.

“ONE: Visions of Victory” was co-headlined by Radzuan’s fellow Malaysian fighter Agilan “Alligator” Thani, 22, who submitted his Indian opponent Amitesh Chaubey, 27, via kimura. In the second bout of the evening, Radzuan submitted her Indian opponent Pooja Tomar via triangle choke.

“ONE: Pursuit of Power” will also take place at the Axiata Arena. In the second bout of the evening, Radzuan will compete in the women’s atomweight division against Priscilla “Thathi” Hertati Lumban Gaol, 30, of Indonesia.

Radzuan made her professional MMA debut in July 2017 with a quick knockout victory, which earned her a spot on the global stage of ONE Championship. Malaysian fans see her as the one who will follow the footsteps of retired Malaysian MMA star Ann “Athena” Osman, 32.

When Radzuan was six years old, he had a brief training in silat. Shortly after, she joined Ultimate MMA Academy, training in various martial arts disciplines. After just three months of training, she competed in Muay Thai for the first time.

Driven by a hunger to compete, Radzuan followed that up with bouts in wushu, BJJ, kickboxing and boxing. Along the way, she captured a wushu world championship.

The atomweight bout between Radzuan and Gaol is the only female match on the “ONE: Pursuit of Power” card. In the main event, Thani will compete in the welterweight division against Zebaztian “The Bandit” Kadestam, 27, of Sweden.

Thani’s most recent bout was at “ONE: Visions of Victory.” Here is a recap of the event: