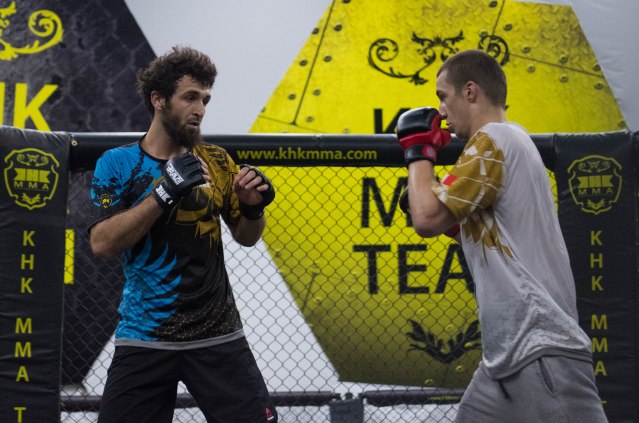 Fighting out of Dagestani, Russia, Zabit Magomedsharipov, 27, is scheduled to compete at “UFC 228” September 8, 2018. To prepare for the bout, the Dagestani fighter has arrived in the Kingdom of Bahrain to start his training at Khalid Bin Hamad Al Khalifa Mixed Martial Arts (KHK MMA) Bahrain.

Founded by His Highness Khalid bin Hamad Al Khalifa, 28, and Brave Combat Federation president Mohammed “The Hawk” Shahid, 28, in February 2015, KHK MMA Bahrain has played host to the training of several MMA stars. Among them are Bellator MMA fighter James Gallagher and Magomedsharipov’s fellow Dagestani and UFC fighter Khabib “The Eagle” Nurmagomedov, 29, who is the reigning UFC Lightweight Champion.

Magomedsharipov had a meeting with Al Khalifa and the officials of Brave CF. They discussed MMA in Bahrain and the initiatives directed towards global expansion of the sport.

Welcome to Bahrain, @zabit_magomedsharipov The rising Featherweight star from Dagestan will be training at KHK MMA ahead of his upcoming fight! #KHKMMA

A featherweight bout between Magomedsharipov and Yair “El Pantera” Rodriguez, 25, of Chihuahua, Mexico has been booked for “UFC 228,” which will take place at the American Airlines Center in Dallas, Texas. This marks the Dagestani contender’s fourth bout in the UFC.

The two-week training camp of Magomedsharipov at KHK MMA Bahrain is focused on wrestling. He is joined by his countrymen including Nurmagomedov’s father Abdulmanap Nurmagomedov, striking coach Renat Abu Ahmad and Brave CF fighter Eldar “Khan” Eldarov, 26, who is also the head coach of Bahrain national team for amateur MMA.

KHK MMA Bahrain specializes in wrestling and combat sambo. The training facility will work closely with Abdulmanap and Eldarov.

Since Rodriguez suffers in the grappling department, the intensive wrestling camp at KHK MMA Bahrain will be an advantage for Magomedsharipov. Riding an 11-bout winning streak, the Dagestani fighter currently holds a professional MMA record of 15 wins and 1 loss.

On the other hand, Rodriguez has 10 wins and 2 losses. He is coming out of a loss to Frankie “The Answer” Edgar, 36, of Summit, New Jersey, who also trains at KHK MMA Bahrain.

On May 13, 2017, Edgar knocked out Rodriguez at “UFC 211,” which took place at the American Airlines Center. It marked the first UFC loss of the Mexican contender.

Meanwhile, here is an interview with Magomedsharipov: