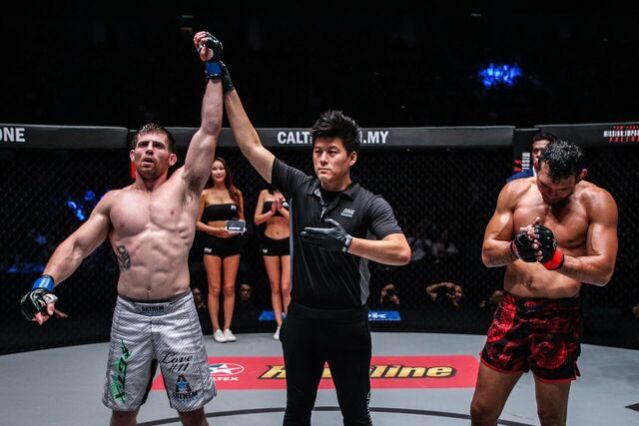 Fighting out of Spokane, Washington, Tyler McGuire, 32, has just successfully defended his undefeated professional mixed martial arts record yet again. It is his 11th victory overall and his first win in ONE Championship.

The Axiata Arena in Kuala Lumpur, Malaysia played host to the ONE Championship event “ONE: Pursuit of Power” on July 13, 2018. One of the most exciting bouts on the card was the welterweight bout between McGuire and Luis “Sapo” Santos, 38, of Belem, Para, Brazil.

Holding a black belt in judo and a black belt in Brazilian Jiu-Jitsu, Santos has been competing in ONE Championship since 2014. “ONE: Pursuit of Power” marked his seventh bout in the promotion.

On the other hand, McGuire made his ONE Championship debut at “ONE: Pursuit of Power.” Training out of Sik-Jitsu Fighting Systems in Spokane, he is a submission specialist known for his ability to display creative grappling techniques.

After three five-minute rounds, the welterweight bout between Santos and McGuire was left in the hands of the judges. Referee Kemp Cheng raised the American contender’s hand as the winner via unanimous decision.

By defeating Santos at “ONE: Pursuit of Power,” McGuire improved his professional MMA record to 11 wins and 0 loss. On the other hand, Santos hnow has 64 wins and 11 losses.

More than half of Santos’s victories have come by knockout, owing to the otherworldly power in his strikes. Before McGuire, the last fighter to defeat the Brazilian contender was Zebaztian “The Bandit” Kadestam, 27, of Sweden.

The main event of “ONE: Pursuit of Power” was a welterweight bout between Thani and Zebaztian “The Bandit” Kadestam, 27, of Sweden. The Swedish contender knocked out the hometown hero in the third round.

The co-main event was a ONE Super Series Muay Thai featherweight contest between “Smokin” Jo Nattawut, 28, of Thailand and Yohann Fairtex Drai, 26, of France. The Thai contender knocked out his French opponent in the first round.

Watch a “ONE: Pursuit of Power” recap here:

Tagged as: Luis Santos, ONE Championship, ONE: Pursuit of Power, Tyler McGuire