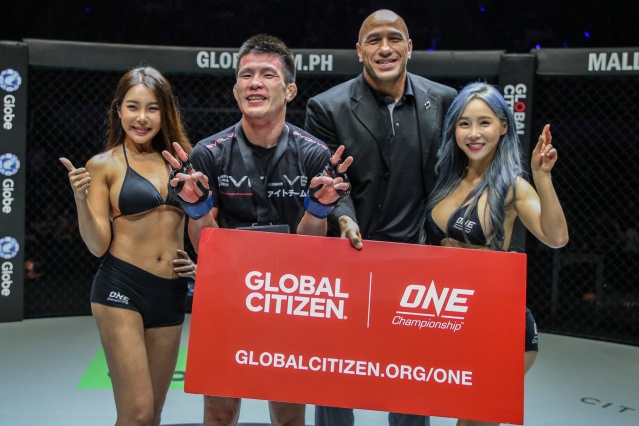 Fighting out of Shizuoka, Japan, former ONE Lightweight World Champion Shinya “Tobikan Judan” Aoki, 35, has earned his seventh victory in ONE Championship. He defeated his Thai opponent at “ONE: Reign of Kings,” which took place at the SM Mall of Asia Arena in Pasay City, Metro Manila, Philippines on July 27, 2018.

At “ONE: Reign of Kings,” Aoki competed in the lightweight division against Shannon “OneShin” Wiratchai, 29, of Bangkok, Thailand. It was the co-main event of the evening.

Referee Yuji Shimada put a stop to the lightweight bout between Aoki and Wiratchai in the first round. The Japanese mixed martial artist was declared the winner via referee stoppage, improving his professional MMA record to 41 wins and 8 losses.

The technical knockout victory earned Aoki GoDaddy Knockout of the Night honors. The award was presented to him by reigning ONE Heavyweight World Champion Brandon “The Truth” Vera, 40, of the Philippines.

“ONE: Reign of Kings” marked Aoki’s ninth outing in ONE Championship. The only opponents he did not defeat in the promotion were Eduard “Landslide” Folayang, 34, of the Philippines and Ben “Funky” Askren, 34, of the United States.

Aside from Wiratchai, the other ONE Championship athletes who lost to Aoki were Arnaud “The Game” LePont, 38, of Vietnam, Koketsu “No Face” Boku, 41, of Japan, Cody “The Wolverine” Stevens, 35, of the U.S., Kamal “Prince of Persia” Shalorus, 40, of Iran, Koji “The Commander” Ando, 33, of Japan, Kazushi “The Gracie Hunter” Sakuraba, 49, of Japan, and Rasul Yakhyaev, 27, of Russia. Here are the official “ONE: Reign of Kings” results: